Here are some common questions about Heliomotion

Please browse the questions we have listed below. If you don’t find the answer to your question, or need some extra details, please don’t hesitate to contact us. A PDF version is available here for download.

The tracker has an integrated GPS module used to determine the local time, date, latitude and longitude. Using this information the tracker calculates the sun’s position in the sky in order to follow it.

Solar tracking increases energy yield by 25-50% per year, compared with a stationary panel facing south with an ideal tilt. The energy increase depends on the latitude where the installation is located, from +25% at the northern equinox to +50% in Scandinavia. The extra energy is generated in the morning and in the evening which matches the consumption curve of a typical household much more efficiently than a static system which peaks at solar noon – often when everyone is out of the house.

The solar tracker can be powered from any constant 24 VDC power source, either using the included 24 VDC power adapter or by connecting it to a 24 VDC battery bank. The permitted input voltage range is 10-28 VDC. Average power consumption is 0.4 watt (0.01kWh/day).

All Heliomotion models are engineered to withstand wind loads up to 35 meters per second – equivalent to 80 miles per hour. Should expected wind speed surpass 30 m/s (70 mph), it is recommended that you turn off the tracker and use the provided extension rod to tilt the panels horizontally. This will reduce wear and protect the installation until the storm has passed, as this is the optimum position for the installation to resist high wind loads.

A wind sensor is being developed as an optional add-on. This will provide wind speed and direction data to a Heliomotion, allowing the unit to automatically turn away from the wind in stormy weather to reduce wear. Please contact us if you would like to be informed on the development of this feature.

In a snowy climate, the foundation column should be at least 1 metre above ground level to prevent the tracker from getting stuck in the snow during winter. As the panels are at a steep angle in the tracker’s morning and evening positions, most snow falls off the unit and there is usually no need to remove the snow manually. As an added safety feature, the tracker will pause tracking if it is unable to move, for example due to excessive snow or vegetation blocking its path. Remove the obstacles and the tracker will automatically resume normal operation within a few hours.

Yes. Keep in mind that in dry regions it may be necessary to wash the panels every couple of months to prevent dust and sand from building up on the panels. In regions with rain, the solar panels are typically self-cleaning and do not require additional attention.

The tracker is designed to work without any reconfiguration. For service purposes the tool Heliocom can be used to communicate with the tracker. Start the tool on a Windows laptop and connect it to the USB terminal on the tracker’s circuit board using a USB cable (Type-A Male to Type-A Male). A description of this tool is available on the support page.

Heliomotion uses a rod that automatically tilts the panels over the course of the day, giving a sinus approximation of the sun’s height angle. In morning/evening position the tilt starts at 20 degrees from the vertical plane. In south position the tilt is dependent on the latitude where the unit is installed. For instance, in London (latitude 50°) the tilt in the south position is 40° to get the best angle towards the sun over the course of the whole year.

The Heliomotion tracker is designed to last for as long as the panels last, typically 25-40 years. We give a 5 year warranty to provide free replacement parts. The warranty appears on the last page of the Heliomotion manual.

We recommend the power plant is placed within 100 meters of where the power will be used. The cable size can be adjusted to keep transmission losses low between the power plant and the house. A cable with 2.5mm2 thick wires is suitable for distances up to 40 meters, whereas a cable with 6mm2 thick wires is recommended for longer distances up to 100 meters. Required cable dimension is subject to local regulations.

Typically, you want to use a grid-tied system if utility power is available, because it has a lower cost and it allows you to automatically utilize 100% of your produced electricity. The surplus electricity not consumed by your household will be sold to the grid. In the UK, this is the case only if you have the benefit of the FiT or the SEG.

Battery-tied system are most often used for off-grid installations when there is no access to utility power. They can also provide backup power during blackouts and allow a greater proportion of generated solar energy to be consumed within the household. When considering a battery-tied system it’s important to keep in mind that generated solar energy that is not consumed will be discarded when the batteries are full. Therefore, to make full use of a battery-tied solar system it should be paired with reoccurring daily loads, such as a heat pump or an electric vehicle.

Larger backup needs are usually combined with a larger battery bank and a larger Heliomotion. We typically recommend a minimum of 5 kWh for PV-2M/3M, 10 kWh for PV-4M and 15 kWh for PV-6M when using deep cycle lead-acid batteries, and half as much capacity when using LiFePO4 batteries.

Most grid-tied inverters are fanless and make virtually no noise. Battery-tied solar stations typically have fans which kick in progressively as the inverter load increases, so it should be placed somewhere where the sound doesn’t bother anyone, such as a garage, a shed or a cabinet.

The solar tracker itself is very silent. Listening carefully right next to the tracker, it makes the sound of a distant cicada every 7 minutes or so when it updates its position.

Yes, but we have transitioned to primarily focusing on electrical installations, as demand for them has been considerably larger. Upon request, we can provide thermal systems under the model names TC-1000 and TC-2000 (TC for thermal collector).

See the product page for a description of the packages. When you order a Heliomotion you can specify what your package should contain. We manufacture solar tracking power plants for both grid-tied and battery-tied applications in different sizes.

We advise against installing the Heliomotion on a roof. A free standing unit on the ground is much easier to install and service.

A battery-tied inverter creates its own local power grid which is independent from the utility’s grid. To make use of this power an electrician needs to connect the power output from the inverter either to new power outlets or to existing power outlets through the building’s main fuse box. Keep in mind that the 1-phase VAC generated by a battery-tied inverter is not synchronized to the utility grid and so cannot be used in combination with the utility grid to power any 3-phase loads.

The GEL battery is durable and has a design life of up to 12 years. Each charge/discharge cycle reduces the maximum capacity of a battery, more so the deeper the cycle is. After 750 cycles that are 50% deep, or 1800 cycles 30% deep, a GEL battery will have lost 20% of its maximum capacity. This is called one service life.

When the capacity has fallen beyond what you are willing to accept, it is time to replace the battery. This is usually after two service life cycles have been consumed. So if the average cycle per day is 30% deep then the battery can be considered exhausted after 3600 cycles or 10 years. Keep in mind that GEL batteries must never be left in a discharged state for any longer periods as that will reduce their maximum capacity.

Heliomotion parts, including the column and solar tracker, can be ordered with a coating of either RAL9006 (Silver) or RAL6025 (Fern Green) as the final layer of paint.

If there is a need to apply a second coating of corrosion resistant paint we suggest using spray paint with a matching RAL color.

Use of micro inverters with Heliomotion are recommended for the following reasons:

Microinverters are typically not suitable in the following case:

Microinverters are not ideal in the following case:

There are three options for the foundation: a large hole filled with concrete, anchoring threaded rods to bedrock, or using ground screws. Because the system is bolted to the ground, it means it can be un-bolted and moved to a new property if needed. See assembly guide for instructions on making a concrete or bedrock foundation.

If you prefer to use ground anchors please contact us. Ground anchors require that the person installing them has a specialized tool to drive the anchors into the ground. The anchors are more eco-friendly than using concrete and are quicker to install since there is no need to wait for the concrete to cure.

The area around the foundation column needs to be clear so that the solar tracker can rotate freely without any obstacles. The minimum clearance from the column when using 1.6x1m panels is 1 meter for PV-2, 1.3 meters for PV-3, 1.5 meters for PV-4, and 2 meters for a PV-6. It is strongly recommended to have at least 0.5 meters of extra clearance on all sides to allow for the panels to be tilted horizontally. See the PDF files describing the specific Heliomotion dimensions on the Documents page for more info. 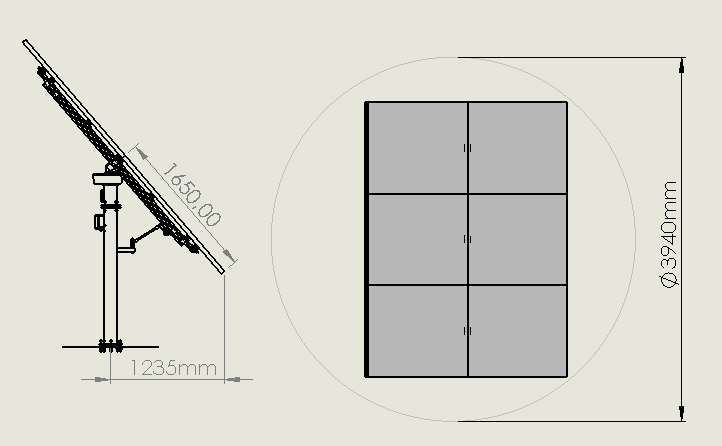